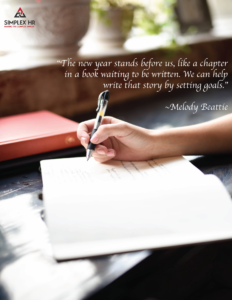 A new year symbolizes a new beginning, a new chapter in your story. Chances are you have spent time thinking about and carefully listing out goals or aspirations you want to achieve in the new year. Despite your best intentions, it is likely you are among the majority of the population who will fall short of reaching those goals.

This year you want your chapter to end differently than those of years past. You are determined to be one of the 12% who experience the satisfaction of completing those new year’s goals.

You refuse to be one of the people who start out the year highly motivated, but soon they find themselves at the end of the year looking at a long list of intentions.

The “New Year, New Me” Trap

It’s unreasonable to believe you can overhaul or rewrite your entire life in one year. It took you many chapters to become who you are.  Don’t think you can remodel yourself in one chapter. Instead, start with making smaller changes you can be proud of. Changes that you can build upon as your story unfolds. You are more likely to be successful with smaller changes because they are less intimidating, therefore allowing you to stick with them longer. So, take a page out of the tortoise’s book and remember slow and steady wins the race. It’s not glamorous or sexy, but it’s a lot more effective than starting off the race sprinting toward a finish line that is a year away.

The biggest reason why most New Year’s resolutions fail is because people focus on what  they want instead of why  they want it.  You probably have a clear idea of what you want to accomplish such as losing weight, traveling, eating healthier, or saving money. Having an idea as to why these things are important to you is the key to unlocking success and achieving those goals.  Your “Why” is a powerful motivator. If you don’t have it, you are more susceptible to temptation and less inclined to stick to your goals when obstacles arise.

Understanding why you want to do something is just as important as declaring what you are going to do. So, forget about any preconceived notions. Ask yourself “why” to get at your core motivation.

The All or Nothing Trap

You are going to experience obstacles or setbacks. How you respond to those determines how likely you will be to achieve your goals. Unfortunately, many of us fall into the “all or nothing” mentality and throw our goals out the window when we experience a less than perfect moment. You don’t need to abandon your goals after having an unhealthy meal, skipping a workout, or splurging on an expensive item you don’t need. That would be like giving away your puppy because he had an accident in the house or a fighter walking out of the ring after getting punched. I know it sounds ridiculous, however you would be surprised how many people give up on their goals after experiencing one minor setback.

There is a reason why so few people achieve their goals. Reaching a goal is not supposed to be simple, that is why it’s a goal. Once you realize the road ahead is going to be difficult, you can prepare for how to respond.

At the end of the day, dig in your heels and avoid getting sucked into these common traps. It’s okay to feel discouraged at times and it’s okay to slow down. No matter how slow you go, you are still making progress with every word you put on your page.