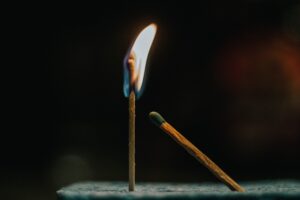 I worked relentlessly to build my career and I made countless sacrifices for my job. In exchange for my long days, sleepless nights, and dedicated mindshare, I received promotions, salary increases, and greater job responsibilities. I was viewed as a high potential employee and assigned choice projects because I did whatever was necessary to get the job done. I abandoned the traditional 8am-5pm schedule, arrived to work early and answered emails or phone calls in the evenings. I spent time preparing for meetings by actually studying pre-reads, researching attendees, and I had developed strategies on how to make the most of those chance encounters with the higher ups. I was engaged and it was exhilirating when I came into work knowing I had packed scheduled. I even broke the silence of the elevator ride (gasp) by chatting with others as I rode up to my destination.

After years at this pace, things gradually begin to change. I started leaving for work a little later each morning. My strategy for encounters with higher ups became more about a plan on how to get through the day “under the radar”. I traded in my elevator conversations for heavy sighs and eye rolls as the elevator stopped on every…single…floor. My frustration peaked one day when my schedule was filled with back to back meetings and I found myself reaching OVER the folder of unreviewed pre-reads to grab my phone, unable to resist the enticement of escaping my reality for another mind-numbing attempt at level 364 on Candy Crush.

I was trapped in an unfulfilling career and I felt myself going down a path of a gradual, agonizing, demise that slowly depleted my energy and joy. I attempted to fight the boredom with the little electronic device tethered to my hand. The memes, Instagram posts, and games I could never admit to anyone I was playing, allowed me to momentarily flee from the indifference I felt. No one noticed my waning productivity because of the reputation I worked so hard to build over the years. So, I continued to get by, ignoring the warning signals that I needed to make a change.

I won’t lie, change is frightening and it’s tough. Change takes courage and something as bold as a career change will test your tenacity. Making a change when you are firing on all cylinders and at the top of your game is hard enough, but when you’ve been spinning on that hamster wheel of boredom for a few years too long it can seem unfeasible.

Once people realize they have real value they can offer in the larger world, they become overwhelmed, not knowing where to start. I knew I sought emotionally and intellectually stimulating experiences but the thought of finding a job that gave me meaning and purpose seemed unrealistic.

The good news is that people discover meaning and purpose in their careers time and time again without switching jobs. I found by asking myself these questions, I reignited the flame I used to have, and discovered a newfound passion and appreciation for my chosen career.

1.What would I do if money were no object?

This is a simple yet powerful question because play is a primary activity for developing and discovering our strengths. We have fun and enjoy doing things we are good at. You will not find your calling in your weaknesses. At first I was stuck because I had given up many of my hobbies due to a lack of free time. So, I thought about what my 8-year-old self would have done for fun. The words flowed from my pen and the list grew. I then looked at my list to see if there were any themes. As I scanned the page, I saw words on the paper were activities that allowed me to create things such as music, cooking, and sewing. For the first time I got a glimpse into the fact that creativity was a strength and I enjoyed creating or building new things.

This was an essential question that helped me tap into my purpose. We all do things that help others every day. Many people struggle with this question because they immediately go to charitable or philanthropic acts. I went there too at first and felt inadequate because I was not the President of the PTO and I did not have things like helping the less fortunate on my list. Instead, my list contained the names of the people I help in the many other roles I play such as: parent, coach, child, sibling, friend, or spouse. As I looked at my answers, it dawned on me that I was underestimating the impact I had on others. For example, others enjoyed listening to the music I created, or tasting the food I cooked, or snuggling with the blanket I had crafted for them with care.

This last question was the most introspective and insightful question of the three. I know this can be a bit morose but stick with me for a moment. Linda Ellis wrote a poem called The Dash. The premise of this poem is based on the concept your life is made up of two dates and a dash: the date you were born and the date you die. So I asked myself, “What would you want people to say or remember about your dash?” The answers I wrote down for this question ended up being the things that were the most important to me. These words defined how I behaved.

I contemplated the answers to these questions, and I began to see how combining the “What”, “Who”, and “How” together revealed the clues to finding meaning in my work. The clarity I gained from these three questions enlightened me to the fact that I was in fact in a job that enabled me to build things that helped people; however, I had allowed the fire drills and minutia monopolize my time which prevented me from actually doing those things. Once I had this clarity, I figured out ways to prioritize my time so I could do the things that were most important to me in my personal and professional life. I made a plan to set clear boundaries, and I vowed to adhere to those commitments. My flame was reignited and the next day as I stepped on the elevator, I happily chatted up the person standing next to me.